Yo ho, yo ho, a pirate’s life still isn’t for me

Ok, cement milkshake consumed, hardening the fuck up has commenced. Now, piracy and the recent attempt by part of the Australian Liberal Party to sack its leader and our Prime Minister. What has one to do with the other? Well, Game of Thrones. Okay, I admit the connection is a bit tenuous but bear with me here.

Game of Tones, Malcolms and Julies?

See that? See? And he’s not the only one. Bill Shorten (for the 6.98 billion people not following Australian politics he’s leader of the opposition Labor party) and I think a few others made GoT references over the last week two weeks, and I knew just barely enough about the show to tweet “Tyrion Lannister something something, you’re all bloody useless.” So here’s the thing: there is no bloody way politicians get to make pop culture references that I’m not fully across. I simply won’t permit it and that means I have to start watching the most pirated TV series ever now. Only I’ve created copyrighted material and I’d have been really pissed off if I didn’t get paid, so libertarian arguments against IP notwithstanding I’m unwilling to pirate Game of Thrones even to catch up with that wing-eared clown (house: Abbott; sigil: a smuggled budgie; words: “Stop The Boats”)

Normally I’m very patient when it comes to TV series, even very popular ones. The furore over the weird ending to Battlestar Galactica was just dying down when I bought the boxed set in a sale, David Simon had moved on to Treme before I got round even to starting The Wire boxed set, and I’ll soon start the penultimate season in my boxed set of The Sopranos. No, I’m not kidding, I really am still on The Sopranos.

Seeing a pattern here? I’m continually tempted to buy Foxtel so I can watch these shows, not to mention footy in high-definition – yes, Channel Seven, I’m looking at you for going back to standard def for all games, you fucking cheapskates – and advert free. But I’m also continually put off by having to pay for several channels of shit I’m not remotely interested in. If it’s not on free to air I’m content to wait for popular shows to end and then binge-watch boxed sets. Sometimes I’ll download the first two or three episodes of something to see if it’s any good and if I don’t like it I’ll just stop there because why would I bother pirating something I’m not interested in? But if I like it I’ll still stop downloading there because I’ll go buy it instead, including the episodes I just watched.

Technically that’s still naughty, but look at it this way: the creators get paid which is good, Rupert Murdoch doesn’t which costs me exactly zero sleep, and I get to annoy everyone I meet by talking excitedly about an episode they watched anywhere from three to ten years ago. All that happens because I can try before I buy, just like you can often read a few pages of an e-book or listen to 30 seconds of a song or have a restricted play with software for free, or even watch award-winning TV shows that have been ruined with badly placed ad breaks and crap scheduling by Australian commercial TV networks.

So for a change, and armed with a very poor excuse, I’ve decided that I’m not waiting any longer to watch Game of Thrones. Sadly they’ve made that only slightly easier than trying to understand the story using pop culture references from Australian politicians.

First off my usual choice of a boxed set was a non starter. I can order one from JB HiFi for $115 on DVD or $125 on Blu-Ray but it’s not actually out until Wednesday while digital versions are cheaper and available right now. On top of that I’m a sucker for extras, which is another reason I wait for boxed sets, except that the extras seem to be available only on the individual seasons. As these go for between $30/$40 (DVD/Blu-Ray) for early seasons and $43/$53 for the most recent one that makes the digital versions even more attractive.*

New tech it is then, but where from? Google’s Play Store doesn’t do a set and the seasons are $29 each, but season 4 was again unavailable at the time I wanted to download it. It’ll be available on Monday so perhaps not a huge deal, but it’s not clear whether it’s an episode a week from Monday or the whole lot. I’d guess the latter as people buying discs will get the whole thing only two days later, so there doesn’t seem any reason to drip feed it. Google’s main problem is the lack of a series 1-4 bundle and that buying each individually is only a dollar per season cheaper than DVDs, though in its favour there’s a heap of extras, many of which are free downloads.

So I turned to iTunes. I will now wait while the Apple haters have a quick rant. Got it out of your system? Okay, good. I hope you saved some energy to say “I told you so” by the end of this piece because you’re going to want to do just that. iTunes’ Australian store has season 1-4 for $90 in SD and $100 in HD, which is $25 cheaper than the disc equivalent. (Incidentally, and of interest to Australian residents used to getting screwed on prices for this kind of thing, it’s currently £60 and £80 on UK iTunes, which is about A$118 and A$157 respectively. We’re cheaper than the US for the moment too. Don’t know why and I don’t suppose it’ll last, so make the most of it.) Again, no extras but I can download many of those from google Play and live without the rest until an everything included set comes out in however many years it takes for the show and/or George R.R. Martin to finish the story. 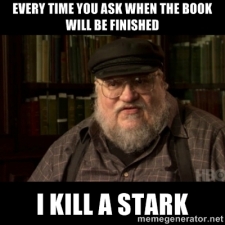 I considered buying the individual series but sometimes I watch TV with the sound down and  subtitles on while the missus is asleep and not all the individual series have subtitles, so I clicked the Take My Dollars Please Apple button and began downloading the first not-music I’ve bought on iTunes. Right away I noticed differences…

I don’t have a superfast connection and I realise that I was downloading 50GB or so but after some pausing while testing download speeds it appeared that iTunes was just barely able to manage a streaming speed and not all the time. Never noticed it buying music and it’s not the end of the world with TV or movies, but it would’ve stopped me binge watching GoT if I’d wanted to do it right away. As I was going to watch just a couple and begin the real binge at the weekend all it really meant to me is I couldn’t simply leave the computer on to download the lot overnight. No matter, but I’ll just watch one on the PC while more download in the background.

Oh, no I won’t, because I’m downloading HD and using an SD display so it won’t let me. Not only that but unlike music I’ve downloaded through iTunes all these video files have DRM protection. That means I can’t convert any of them to watch on my Android tablet either, and playing them on the TV isn’t going to be as simple as loading up a USB stick and shoving it into one of the various ports on TVs, DVRs etc. Software to strip the DRM off would cost about the same as the next couple of seasons of the show and is probably illegal, while an Apple TV box would be double that as well as being yet another addition to the growing pile of HAL-9000 wannabes in the TV corner. So can I download the SD versions too? Sure, for another $100 and if I don’t mind still not being able to play them on my Android tablet or a non-iThing.

I had actually worked all this out before I clicked “Buy” and realised that to stay within the letter of the law and be able to watch on any of our screens (I’m sure we’re not the only people with TVs plus a mixture of screens using Android, Apple and Microsoft operating systems) would more than double the cost, but how fucking ridiculous is it? Remember when we bought videotapes or DVDs from a particular shop and they’d only work on a Sony player or a Panasonic or JVC or whatever, and if yours was made by Pioneer or someone it just wouldn’t work? No, of course you don’t, because that didn’t fucking happen.

The closest we ever came were the Betamax/VHS and HDVD/Blu-Ray format wars, and once those were over and there was a clear winner everyone could just come back from the shops with a new movie and sit down to fucking watch it. Even within the iTunes store you don’t have this bullshit with music because you can easily create MP3 versions of what you buy with iTunes itself and play it on whatever you want. Some copying no doubt goes on but that’s been happening since cassettes came along more than 40 years ago. More importantly, it’s understood that I can buy The Next Day and format shift to play on a non-iThing without David Bowie starving to death in the much the same way my dad taped his Diamond Dogs LP so he could listen to it in the car.

Even as one country (take a collective bow, Britain) has recognised that format shifting isn’t about screwing content creators and legalised it we’re still having to deal with DRbloodyM, which as I understand it is still illegal to remove even where copying is legal. Happily Mrs Exile has an iPad I can nick to watch Game of Thrones in bed or if she’s watching TV, and if she isn’t I can connect it to the TV via HDMI cable and watch Sean Bean striding grumpily around Westeros on a proper sized screen.** But even if Australia allowed format shifting tomorrow I’d still be left with 40 hours of paid for TV to watch and a need to either remove the DRM or get additional pirate copies to have the flexibility of watching it on any screen I own. And what many people in similar positions are likely to think is if you may still end up needing to break the law you might as well just fucking pirate it in the first place. Believe me, I’m tempted.

Just over four years ago I blogged on this topic after reading an article in The Register which said that most of the e-book downloads were legit purchases and suggested that this was because being honest had been made fairly easy. People like easy. People like convenient. People, quite often, don’t mind parting with money if it’s the path of least resistance. If ease and convenience are the pirates’ biggest attraction and the path of least resistance leads to their door you’re not going to sell so much. I’m not lecturing Hollywood about its business model, I’m just telling them how a good number of potential customers want to shop.

* $65 if you want a limited edition with a Joffrey doll. Who is that doll for? Are you supposed to give it to your kids until they’re old enough for all the tits, sex, swearing and violence?
** Shutup shutup shutup. I know he gets his head cut off eventually but I don’t want to know how or why yet.

Posted on February 14, 2015, in Uncategorized and tagged As useful as tits on a fish, Do I have to draw you a picture?, IP. Bookmark the permalink. Comments Off on Yo ho, yo ho, a pirate’s life still isn’t for me.