The dead of Newtown, CT, have only just begun to be buried but certain parts of the media are doing their damnedest to make sure the story stays unburied for as long as humanly possible. Readers, I give you the a report from Nine News and also the take of their print brethren at Melbourne Herald Sun and a piece of froth flecked outrage that has passed their respective in-house test for balanced journalism, factual errors and partisan language notwithstanding. In case the video on that link isn’t viewable from outside Australia here’s a screencap of part of it – you’ll see why in a minute. 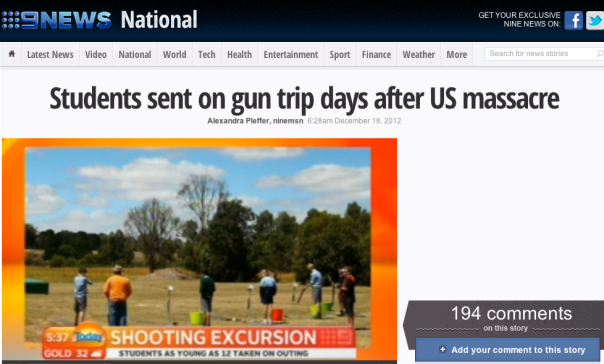 Now let’s get straight into the lip foaming copy, shall we?

Two Victorian high schools sent students as young as 12 on an excursion to a shooting range just two days after a US gunman killed 20 children and six educators in the Sandy Hook massacre.

And if Victoria was anywhere near Connecticut or if the head had seen the news and been inspired to organise the shooting trip because of it that would be perhaps insensitive in the first case and more than a little fucking weird in the second. However, this took place more than 16,000km – over 10,000 miles for those of you working in old money – away, and, as Nine eventually get round to hinting, was organised and booked well before the appalling murders of last Friday.

“It crossed my mind (to cancel the trip after the US tragedy) … but do you stop teaching swimming because someone drowned?” Ballarat High School senior co-ordinator Michael Cook told the Herald Sun.
“We were really too far committed to it.”

Michael Cook makes a very good point, though if it were me I might have mentioned all those charity sausage sizzles in aid of the Black Saturday bushfires three years ago. I don’t recall anyone cracking the shits about people lighting up barbecues after a couple of towns erased from the map, hundreds or thousands of homes destroyed and 174 left dead by bushfires that occurred right fucking here in this state. Tad hypocritical? Don’t answer yet – I’m not done.

This is Harold Holt, Prime Minister of Australia from Januray 1966 to December the following year, when he disappeared and drowned (presumably – his body was never recovered and so there are various entertaining alternative theories) while swimming off Portsea, south of Melbourne.

This is… well, it kind of speaks for itself, doesn’t it? 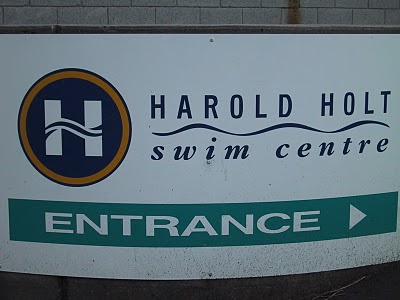 In case you’re wondering the Harold Holt Swim Centre was named couple of years after the event. And nobody seems to have any kind of problem with that, instead pointing out that Holt was a keen swimmer when non Aussies ask why the hell they named a swimming pool after a drowning victim.

More than 50 students from Ballarat High School and Beaufort Secondary College were taught to fire up to 20 rounds each at the Beaufort Gun Club yesterday.

Rounds? Look at that screencap at the top again. Look more like the kind of guns that fire cartridges of shot to me, but perhaps I’m just being pedantic. Rounds, cartridges, bullets, shot – kinda sorta all the same thing to some people, including some journos who seem to pick up most of what they know about guns from Hollywood. Which would explain the next sentence.

The students, aged between 12 and 15, were heard talking about the Connecticut school shooting during the excursion while their classmates learnt to use the rifles.

RIFLES? Look, Nine, a gun that is too long to be a pistol isn’t necessarily a rifle. Do you really have no staff at all who are know the difference between rifles and shotguns and are capable of spotting it before you go to air/web? Christ’s sakes, I’m not saying you should be able to recognise it as a shotgun event just from what’s going on in the picture (looks like some kind of trap discipline to me, which I’d say is a great way to start newcomers since everything – shot and targets – is going away and you can set things up to throw fairly easy ones to give everyone a good chance of breaking a few clays), but surely you’d, oh, not being a journalist I wouldn’t know, but maybe phone the fucking club and ask?

However, Nine weren’t the only ones to say it was rifles, though they were still using the term while showing close-ups of break action over/under shotties on the early evening news. I’d heard rifles mentioned on the car radio earlier, and although my own first experience of shooting was with rifles I suspected it might actually be shotguns because the school’s in rural Victoria and shotguns probably aren’t uncommon in farming towns. There’s a zillion sodding rabbits out there, after all.

So Nine’s real sin might in fact be not doing their own story and just re-writing someone else’s. Hmm, who could that be?

The Herald Sun, where we read:

A VICTORIAN high school has defended its decision to take students as young as 12 on a shooting expedition two days after the Sandy Hook massacre. 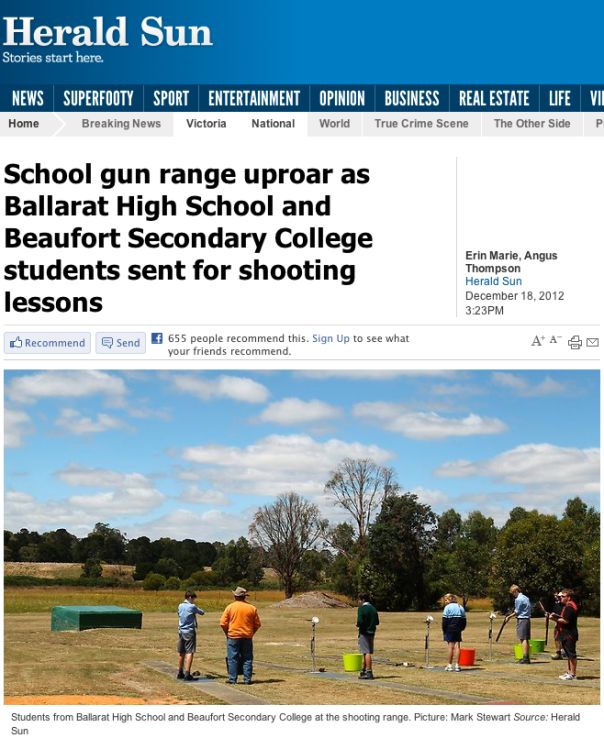 Journalism or churnalism on Nine’s (and others’) part? I’ll leave that for you to decide, but I find it interesting that the Herald Sun piece, time stamped 3:23pm, actually mentions shotguns rather than rifles. Whether that was a hasty correction after everyone else had jumped aboard the outrage bus and was screaming about rifles, because the creature responsible for the murders in America used a rifle too you know, I have no idea, but it just means the story is slightly more factual (it still talks about rounds). It’s still not exactly what you’d call balanced when it contains phrases like this (my bold):

More than 50 students, aged between 12 and 15, from Ballarat High School and Beaufort Secondary College attended the Beaufort Gun Club yesterday where they were taught to wield shotguns and fire up to 20 rounds each.

I’ll tell you now and for free, those students were not taught to wield a shotgun or anything else. Wielding is what you do with a weapon (do please check your dictionaries for the definition of wield, Herald Sun journos) and while like practically anything else it can be used as one a shotgun of the type designed for trap shooting is not a weapon. It’s just a gun. I could bore you with details of why it’s not even a weapon, or is at best sub-optimal as a weapon, from the point of view of the fluffy bunnykins, but if you’re interested you can Google the differences between trap and field guns along with the differences in gun design for different clay target disciplines. Or you could trust me on this: it’s just a gun and not a weapon in the same way that a carving knife is just a knife and not a dagger. Dangerous? Yes, that goes without saying. But not a weapon, only a gun.

And not being a weapon the kids would sure as hell not have been taught to wield one. They’d have been taught to handle and shoot one safely and responsibly so that they’re not a danger to themselves or others, which may be the reason they didn’t come back dead or scared half to death but, well, like this.

Students participating in the outing at the shooting range yesterday were heard discussing the Sandy Hook massacre while their classmates fired.

A 14-year-old Year 8 student described her first experience holding a shotgun as “fun”.

“I was a little nervous, but I’d definitely do it again,” she said.

And despite the predictable whining from the state Education Minister and a gun control lobby talking head (why do we even have a gun control lobby here – they’ve already won) about the timing of the trip, protests from the school about it having been booked long before notwithstanding, I personally think it’s entirely appropriate to teach responsible and safe firearms handling when the fallout from irresponsible, dangerous and downright murderous firearms handling is in people’s minds.

Or would you not want to teach kids interested in swimming how to stay afloat because Harold Holt drowned?

P.S. Just out of interest I wonder will the left suddenly learn to love Murdoch now his publications are reminding us that he is – and I have a vague recollection always was – opposed to private citizens owning effective means of defence? Seems odd that he chose to give up citizenship of one country to become a citizen of one of the few, perhaps the only, nation on the planet that recognises that right.

Posted on December 18, 2012, in Uncategorized and tagged Australia, Don't Be So Fucking Silly, Edukaushun, Self Righteous Pricks, Yanks. Bookmark the permalink. Comments Off on Misfire.