I may have mentioned this before but I’m not a fan of Jamie Oliver. I used to be, at least a bit, back in his Naked Chef days when he was about cooking tasty food with fairly basic facilities, because at the time I had a flat with a kitchen even smaller than the one he used in the show. No kidding, if I was in it there wasn’t room for a stick of celery to join me – and no, before you say anything, that’s not because I’m a fat bastard. But the Naked Chef days are over and Jamie Oliver has long since morphed from rubber lipped Mockney celeb chef into rubber lipped Mockney celeb nannying crusader twat. Frankly it’s not a bad thing to wake up every morning knowing that I live ten thousand miles away from the fucker.

Unfortunately he’s touring Australia again, and yes he’s been invited – I can hardly believe this – by various politicians for his input, or perhaps his output, to help tackle the obesity crisis.* And it might be because of this that a journo asked him if he hadn’t put on a little weight himself recently.

This is 'ow yer use chopsticks, righ'? Now 'ow abaht some more dim-sum, me ol' china?

And it went down like a scallop that had been deep fried in batter for an hour and a half and left in the shell.

Celebrity chef Jamie Oliver says he regrets snapping at a reporter in Australia when he was quizzed over his weight.

Oliver was answering questions from the media during a promotional trip to Sydney when the journalist asked if he’d piled on the pounds since his last trip to Australia.

“I don’t know. I think the last time I had a filling in my teeth, which was quite recently, I was in good nick (condition). But really, I am not really sure. Are you from a tabloid? Thanks for noticing, you bitch,” he retorted.

Tone says a lot and there’s no mention of whether this was in an angry tone or a more light hearted and jokey manner, though the fact he’s saying he regrets it makes me think that it might not have come across as jokey as it could have been. However, the fact that he’s said it at all makes me think that it’s a sore point. Nobody likes being called on hypocrisy, even though we’re all guilty of it now and then. But when you’ve changed the course of your career to point due Nanny it can’t be all that comfortable to feel that you’re being criticised for not practising what you preach. And so…

But News Limited papers report he had time to think about the remark on his way to Melbourne on Wednesday.

Oliver told Myer representative Nicky Buckley he eats fresh food and trains twice a week but could “do better”.

Which seems to have prompted a response from Oliver mate, upside down sleb chef and supermarket TV ad regular, and also owner of Australia’s biggest shit eating grin, Curtis Stone. 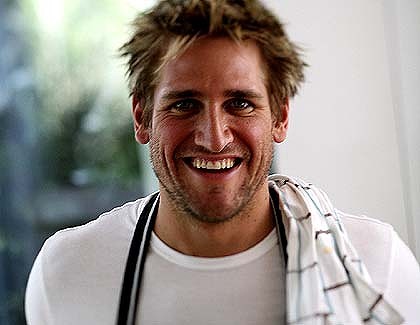 Chef Curtis Stone has weighed into the debate about Jamie Oliver’s size, saying his fellow celebrity chef needs to practise what he preaches.

Stone was co-hosting a US talk show on Friday when he criticised Oliver for calling an Australian journalist a ”bitch” after she questioned whether he had gained weight since his last visit here. He has urged Oliver to show more responsibility because of his stardom, The Hollywood Reporter revealed yesterday. Stone was on a CBS television show The Talk when he spoke up about Oliver’s behaviour during his Australian tour.

”The interesting part of this for me is that Jamie is a big voice and he preaches, you know his show is called The Food Revolution,” Stone said. ”So, he’s there talking about healthy food and you’ve got to practise what you preach.”

And I can’t disagree with that except inasmuch as I’d rather Oliver and Co. didn’t preach at all – my body, not yours, and if I decide to put one or six of Mrs Exile’s delicious cookies into it that’s entirely up to me. But I also have a question. Jamie Oliver’s squeezed a tour of Oz into his hectic advertising and nannying schedule. Curtis Stone, similarly, has managed to fit in co-hosting a talk show in the US around making adverts for Coles supermarkets in which he says he personally visits the farms that supply Coles’ fresh produce.

Do any celebrity chefs (with the possible exception of the culinary version of a B-movie mad scientist, Heston Blumenthal) actually cook anything anymore?

* Tackling the obesity crisis is easy: between the ankles and knees while it’s moving so that its own momentum brings it down. Never try to tackle an obesity crisis above its hips.