I’ve banned smoking in the road outside my house

Of course I’ve done no such thing really. Smoke in here and I’ll tell you to put it out, go outside or just leave. If you take the last option I must accept that once you’re any measurable distance at all from my gate, even if its in millimetres, I have no right to tell you to stop. Well, that’s how I see it, and I don’t feel that’s anything to do with being a libertarian and a fan of property rights – it is, but it’s mainly just being fair and reasonable.

But of course not everyone is prepared to be fair and reasonable with smokers, the twenty-first century’s designated primary untermenschen (drinkers and salad dodgers being the next down the list). Three months ago I left a slightly off topic comment over at Velvet Glove, Iron Fist on a post about smoking establishments starting to reappear in places in Europe. I said this:

Slight tangent, this. I saw a sign in a office building doorway here in Oz recently that said something like ‘No smoking with 5 metres of this doorway’. Might not have been 5 metres (I didn’t think to get a photo) but I remember looking at it and thinking that that applies to rather a lot of pavement and even a bit of road that I very much doubted the building’s owners had any legal control over.

I should have added that I thought the idea was not only a bit iffy from the property rights angle, what with it setting rules on land the rule maker doesn’t own, but that it was completely ridiculous anyway – I’ve been a non-smoker long enough to have grown to dislike the smell, but I find that a couple of paces is all that’s needed and sometimes not even that. Metres plural? Several metres? That’s just being silly. 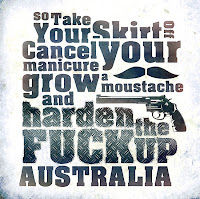 A quick google image search suggests that these X metres away from the door restrictions are springing up everywhere now as I found examples of signs in Canada and the US plus a UK site selling them them in 5, 10 and even 20 metres of self righteous bastardry. What I haven’t found, except in Queensland where they are mad and have banned smoking 4 metres from entrances with a $200 fine (PDF) if you’re closer than that, is any indication that these things can carry any legal force where that area is both open and public, much less owned by someone else. Even in Queensland footpaths are going to be less than 4 metres wide often enough that this is a problem, and where the smokophobes have demanded the right to make rules over an even larger area of property that doesn’t belong to them it can become significant. How significant I noticed last weekend on a trip into South Melbourne.

The buildings I’ve highlighted here form the Spotlight Centre, a small suburban shopping centre consisting of Spotlight, a supermarket, a pharmacy, a few small stores and cafes, and a gym in the larger building on the right, and an Aldi and a Dan Murphy’s liquor store in the one on the left.

Smoking is, of course, prohibited inside according to state law, though this only came into force in July 2007 and I very much doubt smoking was allowed inside before then. I can’t remember having seen a shopping centre anywhere that permitted smoking in their buildings even before the law banned it. However, the Spotlight Centre has gone further and has decided that they don’t want nasssty smokersss gollum stinking up their entrancesss, no preciousss. And so there are signs on the doors which say, among other things, ‘No smoking in centre or within 10m of entry’, though for reasons which I’ll come to I don’t have a photograph.

There are three entrances on different streets to the main building and one to the smaller building (there looks like there will be a second when a currently empty unit is filled). I’ve marked out the rough size and extent of the no smoking zones that result from Spotlight’s banning of smokers a full ten metres – nearly 33 feet in old money – from their entrances, first as they are and second as they’ll be whenever that last main unit with its own entrance is occupied. Embiggering is possible on both images.

Yes, not only do the owners of the Spotlight Centre not want you to smoke inside their buildings, which is perfectly reasonable and absolutely up to them even if there wasn’t a stupid law demanding they do what they’d almost certainly do by choice, but they’re so insistent that even their doors are protected that they demand the right to ban smoking in cars parked outside or even driving past. ‘No smoking in centre or within 10m of entry’ is what it says and there’s no mention of an exception for people who are within that distance but are inside their own property, much less on public property.

Of course the reason for this new phenomenon of pushing smokers even further away is as simple as it was predictable. Give the smokers a place to go, as was the policy in the past, and they’ll go and smoke there. Take it away and they’ll smoke wherever there’s a bit of shelter instead, and often that means doorways and entrances where ‘normal’ people – or ‘tomorrow’s victims of denormalisation’ as I like to think of them – have to go in and out. This is particularly true of workplaces, which generally used to cater for smokers and non-smokers alike and would often set aside a room or an area for the smokers if there was space. The law then said they had to stop doing that so of course the smokers ended up going outside, and if the weather was poor naturally they’d stay as close as possible to the door. Incidentally, this is the reason why there’s no photo of the Spotlight’s Centre’s sign informing of their 10m exclusion zones – I did take one but I didn’t realise that a member of staff who was standing a couple of metres behind me having a cigarette was reflected in the glass, and such casual defiance of an unreasonable rule didn’t deserve to be rewarded with evidence put on the interwebs for anyone to see.* For all I know it’s a sacking offence, so just take my word for it that it really does say 10 metres.

The effect is clear. Wherever there have been smoke bans in certain buildings there are now smokers who want or need to use those buildings dragging the life out of their smokes around the entrances rather than relatively evenly spread around, and having been brainwashed into increasing levels of terror at the sight of a lit fag much of the non smoking public have kicked off often enough that some now feel they can apply their own in house rules beyond the boundaries of their property. Currently this is not enforceable anywhere I know of apart from Queensland, where, as I mentioned, they are mad but also rich enough to be able to hire thousands of Zone Enforcement Response Officers (or ZEROs) to roam around with 4 metre tape measures and books of fine forms.** Sadly it’s only a matter of time before somewhere else follows suit and introduces legislation too, and if it’s here in Victoria there’ll be close 170 feet of non-smoking pavement on one South Melbourne road which you won’t even know about until too late because the damn signs are attached to the bloody doors ten metres inside the zone. Worse, a piece of footpath on which you can smoke today could be turned anti-smoking simply be someone knocking a hole in the wall and putting a door in.

And as usual with all anti-smoking measures that will be cheered by some non-smokers when it should really be feared by smokers and non-smokers alike. Because when someone else gets rights over property they don’t own the can is open and the worms are wriggling everywhere. Don’t believe me? Well, as Leg-iron and Bucko have just pointed out coffee drinkers look like joining the ranks of smokers, drinkers and salad dodgers, and while I don’t currently have any desire to ban even strong smelling coffee being consumed by someone who happens to be walking past my house it happens that I am a tea drinker, you see… ***

Can’t happen? Yeah, I expect the smokers who’ll be walking out into roads all over the world to avoid getting too close to someone’s door thought that too.

* Or maybe it wasn’t defiance but the rain that kept the mystery smoker near the door. It was pretty wet that day, but I doubt that’s an excuse so I’m still not using the photo.
** My mistake. Queensland is $53 billion in debt and would be even deeper in the hole if it hand’t sold some state assets. And I made the ZEROs up, though that doesn’t mean something like them doesn’t really exist.
*** Coffee too, but that spoils the point.

Posted on December 2, 2011, in Uncategorized and tagged Australia, Intolerance, Personal Freedom, What the fuck?. Bookmark the permalink. Comments Off on I’ve banned smoking in the road outside my house.