← Smug mode
Warble gloaming will cut your feet off →

In Soviet Russia, beer drinks you 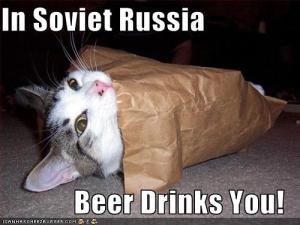 Actually it’s probably more accurate to say that in Soviet Russia beer now drinks you, but it used to eat you because up ’til now they’ve been classing it as food to avoid regulating it, but sadly this shining example of sticking a rather wobbly middle finger up to the healthist nannies has fallen by the wayside.

Under legislation signed by President Dmitry Medvedev, all drinks with alcoholic content higher than 0.5 percent are now classified as alcoholic and subject to sales restrictions.
Before, anything containing less than 10 percent alcohol was treated as a foodstuff and exempt from rules applied to strong drinks.

And why the change?

The reform seeks to end the familiar sight of Russians drinking beer on their way to work in the mornings. The law bans drinking in public from next January, although similar rules on spirits have long been ignored.

Why can’t they just sack the pissed ones? Sure, the poor sods won’t be able to afford to buy beer and won’t have any work to be on their way to while drinking it, but that’s kind of the point. And even if they do start to enforce the public drinking laws it doesn’t strike me as all that difficult to get around the same way people in the west sneak grog into events, though that does mean them drinking spirits rather than beer, and mixed in with something soft to disguise it. Vodka seems to be the old favourite, which is a happy coincidence for the Russians though perhaps not for the Kremlin.

The Kremlin hopes the measures will reduce ruinous levels of alcoholism in Russia, where consumption is double the critical level established by the World Health Organisation.

Of course they’re also restricting the ability to buy alcohol by fiddling with permitted open hours, and if the WHO are jerking chains I suppose we shouldn’t be surprised if increased duties and minimum pricing get mentioned next. And of course once you’ve got that lot all organised nobody can ever touch a drop again without prior approval, right? Oh.

Vodka may be distilled from any starch/sugar-rich plant matter; most vodka today is produced from grains such as sorghum, corn, rye or wheat. Among grain vodkas, rye and wheat vodkas are generally considered superior. Some vodkas are made from potatoes, molasses, soybeans, grapes, rice, sugar beets and sometimes even byproducts of oil refining or wood pulp processing.

Okay, so you can make the stuff out of nearly anything, and since they’ve been doing it for several hundred years it doesn’t sound like it’s rocket science either. Maybe Russians will become clean living and forgo the boozy breakfasts, and maybe they’ll switch to some home made instant blindness in a jam jar that you could use to launch a Soyuz as an alternative to drinking the stuff.

Posted on July 23, 2011, in Uncategorized and tagged Nannying, Prudes. Bookmark the permalink. Comments Off on In Soviet Russia, beer drinks you.

← Smug mode
Warble gloaming will cut your feet off →