There is some for libertarianism in the UK. After yesterday’s Veil Fail post (below) I had a quick look at the website of The Daily Mail, half expecting to find something worthy of a Mail Veil Fail follow up. Well it’s true that I did notice a couple of op-eds by Mail journos suggesting that a burqa ban in the UK was a good idea – possibly they too believe that telling women what to do and what not to wear is somehow increasing their freedom to do as they wish – but more interesting was the result of an online poll on the subject. 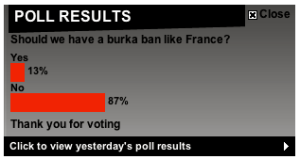 I checked just now and it’s still up and currently about 86% opposed. Now it doesn’t say how many have voted and newspaper online polls aren’t exactly subject to much rigour, so it’s probably not an indication that large numbers of Britons have suddenly found the scales dropping from their eyes and now understand that banning things only reduces liberty. But unless the word’s gone round all the Islam websites that the polls there and they should all vote no it does look like at least some people do understand that bans are always a loss of freedom for someone, and worse that bans often beget bans.

So often I read things in the media that send the needle on my misanthropy dial smashing into the stop at high speed and occasionally out of the meter and into the wall, so it’s a pleasant change to see something that actually offers a smidgeon of hope for a freer future.

Posted on April 13, 2011, in Uncategorized and tagged Lost In Admiration, Talking sense, UK. Bookmark the permalink. Comments Off on Hope.