It all sounds so terribly familiar

“What we are doing is necessary, it is legal and it is right.”

That’s cleared that up – Cameramong has decided it’s necessary and right, and someone has told him that it’s legal. As it was with Saddam Hussein I won’t shed a tear if Gaddafi’s eventual exit from this world has assistance, but fuck spare us from yet another self righteous arsehole in Number 10 explaining why what he sees as a personal moral obligation to commit British forces to action is “necessary, legal and right”.

On the other hand it also seems like my hyperbole of the other week wasn’t far off and that the British contribution has so far been little more than lobbing submarine launched Tomahawks. There’s talk of Tornados and Typhoons, presumably operating from Malta, respectively destroying Gadaffi’s air defences and “patrolling” the skies over Libya, but a quick search of the interwebs (okay, Wikipedia) finds that the Tornado GR4 has a combat range of only 1,390 km and the much newer Typhoon is no better when configured for the same ground attack role or for air defence with a 10 minute loiter time. That works out to be about this much: 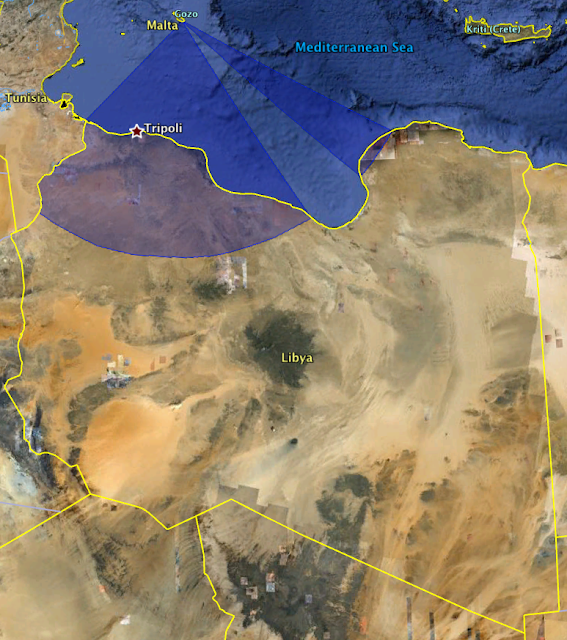 Which means if he’s serious Cameramong must use tanker aircraft as well, and you can be sure the Libyan air force will want to hit those if they can. So I guess that means some more aircraft to defend the aircraft refuelling the aircraft that are actually going to attack something. Cameramong still hasn’t got a operational aircraft carrier, by which I mean a carrier with any aircraft of its own, though even if he had kept the recently retired Harriers they’d have to be refuelled in the air too, and even then the carrier would probably need to be quite closer than it’d like to the Libyan coast. And of course all this presupposes aircraft being allowed to fly from Malta, and if I were the Maltese I’d be telling him respectfully but firmly to fuck off. If Gadaffi is still standing when the bombing and rebellion are over then Britain is safer from reprisals (not counting the terrorist kind) than Malta will be.

So Royal Navy Tomahawks it is, at least for the time being. And Britain should probably be proud of being able to contribute even that much. The way the country’s finances are and the strange priorities that the Cobbleition has for cutting expenditure while not actually making any inroads at all into cutting the national debt mean that Britain’s contribution to the wars of the next decade will probably be the Army Catering Corps turning up with sandwiches for the French and Americans.

Posted on March 20, 2011, in Uncategorized and tagged Do I have to draw you a picture?, Hmmm, Self Righteous Pricks, UK. Bookmark the permalink. Comments Off on It all sounds so terribly familiar.