The Navy shows how to deal with pirates 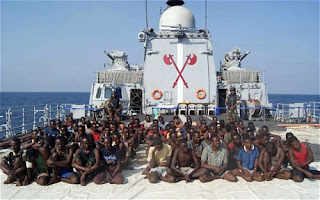 Unfortunately it was not the Royal Navy.

India has seized 61 pirates after a naval gunfight in the Arabian Sea.
The operation is one of the most successful since Somalian pirates escalated their campaign of extortion and kidnap on the Indian Ocean two years ago.
The Indian authorities have yet to disclose the nationality of the suspects but they are believed to be from either Somalia or Yemen.
They were arrested after an Indian naval ship closed in on a hijacked fishing vessel just under 700 miles off the Kerala coastal port of Cochin.
The boat was carrying 61 suspected pirates and 13 of the boat’s crew who had been held captive.
The suspected pirates had hijacked the boat, the Mozambique-flagged Vega 5 in December last year and had since used it as a base for attacks on other ships.
They were finally caught on Sunday after they opened fire on the approaching Indian naval ship. They were forced to jump overboard when their own vessel was set ablaze caught fire in fierce retaliatory fire from the Indian ship. The 13 original crew members were freed in the raid. Indian officials said they found 80 to 90 small arms or rifles and some heavy weapons on the fishing vessel.

I was going to make some remark about the Royal Navy now being unable to achieve the same thing unless the pirates oblige by capturing a cross channel ferry, and that they might have the funds to do more if Britain’s Department for International Development didn’t keep giving money to nations like, say for instance, India, which not only has a space program and a nuclear weapons program but also has a rather bigger navy than Britain including a fairly elderly aircraft carrier that once went by the name of HMS Hermes and helped retake the Falkland Islands. They’ve also got some aircraft to fly off the bloody thing, which is more than can be said for the Royal Navy. But to be fair of course it’s not all about numbers. The Royal Navy has no doubt got some things that give it capabilities that the Indians lack, which brings me to the really big difference between the two. The Royal Navy is embarrassingly not allowed to engage with pirates in case it infringes their human rights or any taken prisoner turn the tables by asking for asylum whereas the Indian navy takes it’s orders from people who don’t give the remotest fuck about the rights of criminals.

So on the basis that Britain is still handing money over to a nation that despite having a lot of very poor people is wealthy enough to afford nukes, space rockets and an expanding navy (they’re building more ships) I think it’d be no more than a fair exchange if the Indian Defence Minister goes to work for the Cobbelition government for as long as the aid taps keep flowing. And to sweeten the deal I suggest that India should not be forced to accept Liam Fox in return.

Unless they want to make him walk a plank.

Posted on March 15, 2011, in Uncategorized and tagged As useful as tits on a fish, Lost In Admiration. Bookmark the permalink. Comments Off on The Navy shows how to deal with pirates.