← Pissing in the wind.
Useful idiot wants thought police to get money for her. →

Was it something I said?

I don’t generally go in for looking too much at my visitor stats, being the fragile soul I am and unsure if my delicate ego can take it if neither of my readers show up one day (hi, Mum). But as I mentioned earlier I have looked today just out of long dormant curiosity about what search terms people have been using, and while they were a bit boring by comparison with some of the lunacy that takes people to some other blogs I did notice that I’ve had an awful lot of visitors in the past 24 hours. Much of it is from the US and it’s mostly going to one F-bomb strewn post about the increasing levels of airport security theatre in general and those bloody airport body scanners in particular.

I’d like to expand on that earlier post a little by telling you about the moment when for me airport security jumped the shark so hugely that there was room for several full grown Megalodons tucking into an eight course whale banquet underneath. This was at London’s Heathrow airport in early 2003, just a few month after someone shot at (and missed, thankfully) an Israeli airliner with surface to air missiles as it left Mombasa airport in Kenya for Tel Aviv.

… it was the missile attack at the Mombasa airport that sent shivers around the world, even though the stingers missed the Tel Aviv-bound plane with 271 people aboard.
Israeli Foreign Minister Benjamin Netanyahu called it “a very serious escalation of international terrorism.”
“Today, they’re firing the missiles at Israeli planes. Tomorrow, they’ll fire missiles at American planes,” he said.

Whether it was some concrete intelligence or whether it was just a feeling in Britain that if it could be American planes then it could as easily be British too, and so began what seemed to me to be the most high profile but completely fucking pointless security operation at Heathrow airport. From the BBC:

The deployments of troops at Heathrow Airport has once again highlighted the danger to airliners from shoulder-fired surface-to-air missiles in the hands of terrorists.

Although there has been no confirmation of the specific threat to UK airports, speculation is rampant that the current state of alert has been sparked by fear of a missile attack.

Meanwhile, a heavy military presence was in place at Heathrow as London remained on a heightened level of security alert amid fears of a possible terrorist attack.
Scotland Yard has refused to reveal the substance of the threat but terror experts said it pointed to a possible missile attack on a plane similar to the one carried out by al Qaeda terrorists in Kenya last year.

The plan seems to have been to fire a shoulder-held anti-aircraft missile at a commercial airliner taking off from Heathrow. Members of al-Qa’ida are known to possess the Russian-built Strela-2 missile, better known as the SAM-7, which has a height range of 3,000 feet. They have used the weapon before in attempted attacks, most recently when two missiles were fired at an Israeli charter aircraft taking off from Mombasa airport in Kenya last November. The Strela-2 can be fired from more than three kilometres away. It was also possible that they had obtained a Stinger air-to-surface missile made in America, which is even more powerful.

A suspected Islamist plot to fire a missile at an airliner prompted the largest security operation at Heathrow for a decade yesterday.
Tony Blair personally authorised the use of 450 troops, with armoured vehicles, to back up more than 1,300 police officers.
Soldiers from the 1st Bn Grenadier Guards and Household Cavalry, carrying semi-automatic weapons, patrolled the terminals and the 17-mile perimeter road.
…
Al-Qa’eda is believed to have a stock of shoulder-launched surface-to-air (SAM) missiles, some capable of reaching targets at a height of 10,000ft and up to five miles away.

Assuming that they’d want to shoot at aircraft landing or taking off, five miles from Heathrow’s runways means attackers would have something like the red area in which to shoot from, possibly a bit more or a bit less depending on how quickly planes departing or arriving at the airport pass in or out of that 10,000 foot ceiling. So potentially all of Staines and Ashford would need watching, plus the outskirts of Windsor

Egham, and Slough. And then there’s all of Hounslow and Isleworth too. And all those fields and roads and so on. Whether they’d want to attack from a rural location where they’d hope to remain unseen or an urban area where they might hope to disperse or near a main road for a fast escape, there’s a lot of choice.

So what protection did Heathrow get to deal with this threat and cover the 150 or so square miles it might come from?

… 450 soldiers at Heathrow, using armoured Scimitar and Spartan reconnaissance vehicles, were deployed throughout the airport from dawn as the first of the day’s 150,000 passengers began checking in.

So about three soldiers per square mile if they were evenly spread, but since they were all hanging around the fucking airport the real average beyond the airport itself must have been close to zero. 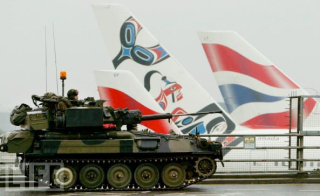 And excuse my layman’s ignorance but what the fuck were they going to do there? Seriously? The Scimitar is an armoured reconnaissance vehicle with a 30mm cannon firing a variety of ammunition up to 4,000 metres and a 7.62mm coaxial machine gun in case you only need to make something lightly dead. While I’d be very reluctant to get on the wrong end of either of them I highly doubt that they’ve been used to shoot down many surface to air missiles, particularly if launched from a site and at a target beyond the 4,000 metre range of the Scimitar’s main weapon. So as far as I can see deploying troops in Scimitars was, to quote Malcolm Tucker, as much use as a marzipan dildo. The Spartan, being an armoured personnel carrier with just the machine gun, wasn’t even that useful.

So I ask again: what the fuck were the troops and armour for? Had the worst happened and some young lads with full balls and empty heads, too hopeful of getting laid in the next world to settle down and enjoy this one, actually got hold of a couple of Stingers and downed a plane – because the troops didn’t seem to have anything that would have stopped it – what exactly were they going to do? Presumably they could use their vehicles’ speed across country to close within range of the wreckage and… er… look at it for a bit until the fire brigade showed up and began hosing down the burning debris. Perhaps you might be thinking that there was an unaired possibility of a car attack like the one at Glasgow airport in 2007, but if so I still don’t see what good they’d be. Let me put it like this: hands up anyone who likes the idea of machine gun fire and 30mm cannon shells flying around one of the world’s busiest airports.

Anyone? Anyone at all?

So it seems to me that their purpose was never to be an effective counter to possible missile fire but to be seen, to make the threat seem credible, to make people think it was being taken seriously if the Army was being deployed, and to give everyone the illusion of being safer.* And look, who knows? Maybe there was a lot of other stuff going on with the police, Special Branch, MI5 etc behind the scenes to make sure a missile wouldn’t be launched in the first place. That seems likely to me but it certainly wouldn’t require the support of 450 soldiers in light tanks hanging around outside the terminals who weren’t equipped for doing much in the event of an attack but standing guard while someone else swept up the fucking wreckage unless, by some miracle, a spectacularly stupid terrorist chose to set up to fire a SAM within range of a 30mm and without any innocent civilians in the way.

So that was when and where I stopped taking it seriously, and I’ve looked at it all with a critical eye ever since. As a practical matter I don’t worry about flying because the odds are really very good for each individual passenger, but I’d feel absolutely no safer as a result of all this crap we’re put through before we’re allowed to fly and certainly not from seeing troops equipped for battle with Soviet patrols blocking the entrance to the fucking car park. As I keep saying, the Israelis don’t bother with this bullshit and they’re surrounded by people who want them dead. More to the point, I object to being treated like a suspect when there is no earthly reason I should be. I doubt I look or act like a loony bomber and I imagine the only profile I fit is that of an annoyed bastard who objects to having to turn up so early for an international flight because of all the fucking security procedures that it’s fast becoming possible to spend more time in the fucking airports at either end than in the fucking air between them.

And here’s a thought – almost certainly neither do you! And if we don’t then why the fuck are we having to pay for the privilege of being treated this way?

Well, I won’t. Flying doesn’t scare me but it does bore me, and these days it also offends me. For that they should be paying me to get on the fucking plane! Until something changes I simply won’t fly unless circumstances absolutely force me to. This is a bloody big country and that choice sometimes means either a long drive or bus ride or a slightly faster but very expensive train journey, and obviously all international trips would mean a very long swim. So the bastards know they’ll get me on a plane now and then – for my last trip to Perth I didn’t have time to go overland and had to grit my teeth through the bullshit, especially when I forgot about shoe checks and showed up in hiking boots – but if at all possible I’ll drive straight past the airport, window down, arm extended and middle finger raised to the unfriendly skies.

And I recommend it to anyone.

Edited to add: link fixed. Thanks for the heads up to Sadbutmadlad.

* And maybe, just maybe, to build the foundations for people to accept far more expensive and intrusive security theatre later.

Posted on February 3, 2011, in Uncategorized and tagged As useful as tits on a fish, Bastards, Department of the Fucking Obvious, Fuck 'em, Personal Freedom, Security Theatre, Trust the Government?, UK. Bookmark the permalink. Comments Off on Was it something I said?.

← Pissing in the wind.
Useful idiot wants thought police to get money for her. →