There’s a fair amount of anti-Islam feeling going on at the moment, and with disturbing videos such as this* (which appears to be an actual girl’s death by stoning and is NSF anywhere – it is without doubt the most distressing thing I’ve seen since Neda Agha-Soltan was shot and killed, and if anything the behaviour of the mob makes it even worse) it’s easy to understand why. There sometimes seems to be no way we in nominally Christian nations can find common ground with what many commenters sarcastically refer to as the religion of peace. On the other hand, a good read of the Bible could easily have you wondering why the hell not (death stuff in bold, rape and assorted lunacy underlined): 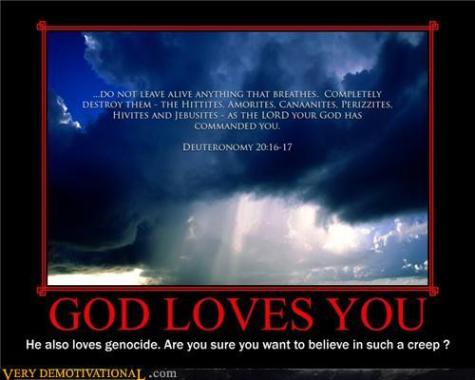 Frankly I’d read enough at this point, but let’s not forget the Bible is also all for things like genital mutilation of infant boys, holding captive and raping women taken prisoner during war, selling your children into debt bondage, slavery subject to certain conditions and various other stuff we’d all find unthinkable now.

Oh, and when women have got the painters in they’re unclean, which, what with the bleeding, bloating, stomach cramps and so on, might not be a huge comfort. For a religion of love you’d think there’d have been something about chocolate or flowers or ice cream, but no. Sorry, ladies, not even a hot water bottle’s worth of sympathy. Uncleanliness it is and you’ve just got to rock with it. I imagine you should blame that Eve bird from Genesis since she was told that because of her the miracle of childbirth for all women was going to be like shoving a fire extinguisher through a letter box, so I expect the whole menstrual cramps and unclean business is probably her fault as well.

You get stuff that makes sense like offspring not being responsible for the sins of their parents and vice versa, but then there’re examples of precisely that going on with Eve’s disobedience and with illegitimate offspring and their own offspring to the tenth generation are excluded from ‘the assembly’. So is anyone who’s had their balls crushed or, somewhat surprisingly given prescribed male genital mutilation, their knob cut off. Suffice to say that the Bible, if taken literally, would make Christians and Jews every bit as vicious, violent, misogynistic and downright batshit insane as anything the Koran has to offer, and of course in the past they have been.

And in case you think it’s all Old Testament stuff and that Christians are beyond that? Well, ignoring the fact that plenty think the Old Testament is evidence that the world was created at a date that would make it more recent than agriculture was developed, and therefore are very much not beyond it, there’s some good stuff in the New Testament as well.

Seem at all like what we’re worrying about at the moment with Islam, no? Surely the prospect of fundamentalist Judaism/Christianity should be just as scary and outrageous, if not more so. I mean, look: low value on human life, check; death sentences even for fairly trivial offences, check; women treated as second class citizens with far fewer rights, check; approval of rape, check; approval of raping minors, check; otherwise pretty hung up on other people’s sex lives, check; a worrying inclination to kill everyone and destroy everything that stands in the way of the faithful, check; violent proselytisation, check; holy war, check; promise of heavenly reward in the next world in return for zealous butchery in this one, check… need I go on?

Much of the criticism levelled at Islam is for stuff that is absolutely okay according to both Testaments, and bearing in mind that some of that stuff is two thousand years older than the Koran you have to wonder how much of what went in the latter was influenced by traditions that were already ancient. Why the hell aren’t we all worrying about Christianity? At the moment Christians still comfortably outnumber Muslims by half a billion or so and one of the world’s biggest Christian nations has several thousand nuclear weapons, can call on more than two million men and women under arms with some highly advanced weaponry, seems indisposed towards electing a leader who is not themselves religious, and has a track record of conflict with other nations over the last… what, forty years? Fifty? And while we’re worrying about Muslims playing the my-god’s-better-than-your-god game there seems to be a growing number of Christians, especially in the US, who insist on a literal interpretation of the bits of the Bible that condone homophobia and support their belief in a very young (in geological terms) Earth despite the existence of some very, very ancient rocks. Maybe they’ll go in for the whole spreading the message by the sword thing next.

So am I worried about Christianity? No, not hugely (though not quite ‘not at all’ either). And even though I think the so-called fundamentalist Christians, the Creationist gang, are a bit on the loopy side I don’t think anyone else should be. Yes, I do have a problem with their attempts to get Creationism taught in science classes, but not so much because I don’t believe it myself as because like anything that can’t actually be disproved it doesn’t qualify as a scientific theory. It doesn’t end there either – I have a problem with their frequent desire to have secular laws based on their religious laws, I have a problem with the book burning brigade (not just this Pastor Terry Jones bloke’s threat to burn Korans today – assuming he doesn’t change his mind again and burn them after all – but also those nutjobs burning Harry Potter books in case they taught their children how to do spells) and I have a problem with the massive hang ups some of the more prudish of them have about other people having anything other than vanilla sex, and frequently that too.

But, and this is a very important but, I don’t think any but the most microscopic handful of them want a return to stoning and burning people to death, violent proselytising, raping women and children and genocidal destruction of entire cities. You see, whatever we think of their beliefs, as a group Christians are just a bit too nice for that. Biblically and historically they’re an awful bunch of people that non-Christians should be utterly shit scared of, but all that stuff, the Crusades, the Inquisition, Malleus Maleficarum, witch trials, persecution of unbelievers, the kill-them-all-God-will-know-his-own thing, no small amount of papal bull, and all the violence and ridiculously harsh punishment in the Bible is in the past. Well, for most Christians it is, and I’m sure for most of the rest virtually all of it is.

No, Christianity really doesn’t worry me much despite everything in the Bible because Christians filter what it has to say through a layer – albeit of variable thickness – of pragmatism and common sense. And for that reason Islam also doesn’t worry me much no matter what’s in the Koran. I can’t imagine there’s anything in there that’s worse than the Bible, and just as most Christians have left the worst of that behind them I’ve met Muslims, probably typical ones, who also interpret their scripture in a way that is more up to date and even handed for everyone around them. To me that suggests that their religion is not so much a cause of violence and misogyny as it is an excuse for it among those who are naturally inclined towards violence and misogyny… just as Christianity and Judaism used to be (and probably still are for a very small number of people).

And if I’ve not convinced you ask yourselves this: if they weren’t already spoken for in the religious madness department and if stoning women still went on in modern Christianity do you think perhaps the mob in that video, the same ones who brained that poor girl with rocks and breeze blocks while somewhat insanely trying to keep her dignity intact by covering her legs and backside as her blood pooled around her head, would look at the Bible and say something like, “Hey, guys, have you seen what’s in this Bible book? It’s got the whole lot in here. Seriously, fellas, this sounds like just the religion for us.”

And with what the Bible would give them to work with wouldn’t they be just as violent and misogynistic as Christians? With that in mind is it Islam per se we should worry about or just generally unthinking, irrationally violent fucknuts who love nothing more than to hate?

P.S. – several hours have gone into this blog post over the last three days, mostly spent thumbing through an ancient family Bible and searching online versions for the various examples of Biblical death, destruction and general hideousness I gave near the top, and by the way I skipped plenty of stuff. In the meantime the antics of the wannabe book burner in Florida prompted Dizzy to write this, in which he’s given a link to an satirical ‘Whose God Is More Vicious?‘ quiz based on genuine scripture from both religions. Interesting answers, though if you’ve read all of my verbose rantings today you probably won’t be surprised. Anyway, seven out of ten is my score to beat (and humiliate, and lash, and stone, and burn and so on), with a metaphorical land of milk and honey for anyone getting full marks first go.

Posted on September 11, 2010, in Uncategorized and tagged Headcases, Hmmm, Just plain weird, Prudes. Bookmark the permalink. Comments Off on The religion of peace vs the religion of love..