The Streisand effect is a primarily online phenomenon in which an attempt to censor or remove a piece of information has the unintended consequence of causing the information to be publicized widely and to a greater extent than would have occurred if no censorship had been attempted. It is named after American entertainer Barbra Streisand, following a 2003 incident in which her attempts to suppress photographs of her residence inadvertently generated further publicity.

It’s often been the case that attempts to ban something give it a greater attraction than if it had been ignored. “Don’t climb on to the worktop and take biscuits from the tin,” we’re told as children, but until the fact that there was a tin of biscuits was brought to our attention we’d have been happy to go play in the garden or watch TV. Later on we find new restrictions and prohibitions, and naturally many attempt to beat them by drinking, smoking and screwing before they’re of legal age and then trying to find some pot. This is only natural since the reasons given for the prohibition can be unconvincing and so the only way people can understand the need for the rule is to break it and see what all the fuss is about. Therefore if you want teenagers to smoke or drink and to develop a little black market in fake ID just tell them they can’t ’til they’re 18, if you want more people to become interested in drugs just tell them that drugs are completely forbidden, and if you want to ensure maximum publicity for some otherwise fairly uninteresting publication you should emulate Barbara Streisand and do your absolute level best to censor it.

Now Babs may have inadvertently put her name to this in 2003, but it’s much older. I’ve never read Lady Chatterley’s Lover but I’m told by someone who has that it’s not exactly a page-turner, so I can’t help but wonder if a few sex scenes and a smattering of Anglo-Saxon (including at least one word already published centuries before by Chaucer) was enough to create such widespread interest. Or was it that anything that had been banned for three decades had to be something really juicy? During my childhood there was Relax by Frankie Goes To Hollywood, which might well have been good enough to be a hit anyway but was absolutely guaranteed success when the BBC refused to air first the video and then the song, and then Spycatcher, which was easily the most boring book I have ever attempted to read (I gave up about a quarter of the way in, and that was the second try). I know many people who’ve tried and some who actually made it all the way through but very few who actually enjoyed it, yet it sold by the pallet load thanks to the vast amount of free publicity it got courtesy of the government’s desire to prevent it being sold at all. Streisand Effect? It could as easily have been called the Spycatcher Effect or the Frankie Effect.

So with all that in mind you might think that censors would be wary of using their power to ban and prohibit for fear of generating wider interest in something that would largely pass unnoticed. Well, you probably wouldn’t think that because Babs Streisand and her lawyers hadn’t learned, the fucktroons that banned Spycatcher hadn’t learned, the BBC censors that banned Relax hadn’t learned, and so on and so on. Censors never learn, especially the Australian censors, so actually it should be no surprise at all that they’re at it again. Having temporarily run out of computer games to ruin they’ve turned their attention to the movies and banned a film called LA Zombie.

And its director is absolutely delighted.

“My first thought was ‘Eureka!'” director Bruce LaBruce said, speaking from his home in Toronto.

“I’ll never understand how censors don’t see that the more they try to suppress a film, the more people will want to see it. It gives me a profile I didn’t have yesterday.” 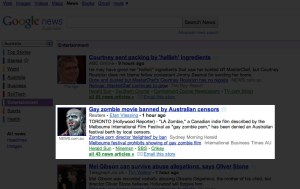 Really? The synopsis on Wikipedia says that the central character is a nutter who thinks he’s an alien zombie and who attempts to reanimate the dead by shagging them up the shit chute. And that’s a metaphor for healing, is it? Yeah, okay, right.

LaBruce admitted that his film did have explicit scenes of sex and violence, but said the version that was banned from the festival was a “soft core” version, where “it’s obviously a fake prosthetic. It’s a bizarre-looking thing with a scorpion’s stinger, it’s clearly not a human penis.”

That’s big of you.

Seriously, this film didn’t need to be banned. I’m a pretty normal person and I’m no more likely to be corrupted by it than I was to learn the innermost secrets of the British Secret Service by wading through something as coma-inducing as fucking Spycatcher. Have the courage to treat people as adults and allow them to choose for themselves what they want to see, and you may be pleasantly surprised how many won’t bother to seek out what you were tempted to ban. Or carry on using taxpayers’ money to generate vast amounts of free publicity for crap that would have sunk without trace had it been left alone. Your choice, though if you carry on the way you have been you should expect people to be provocative on purpose just so they don’t have to bother with an advertising budget. Don’t believe me, oh censortive souls? Then consider this:

The director denied he’d deliberately sought censorship when making LA Zombie… “I wasn’t expecting it with this one,” he said. “My film Otto screened in Melbourne and that also had a zombie penetrating another zombie.”

Even if you accept LaBruce’s denial that he wanted this to happen, and the fact that he’s used the opportunity to plug another one of his movies means we should probably take it with a large pinch of salt, it seems possible that he’s thought about it before. “I wasn’t expecting it with this one.” If it’s occurred to one then it will certainly have occurred to many more, so it’s now down to the censors to decide whether or not the best method of censorship in the future is in fact not to censor at all. But if I was a betting man I’d put money on them ignoring the evidence and carrying on banning and restricting and cutting and prohibiting just as they and their kind always have. It’s not just that at heart they’re paternalists who really do believe they know what’s best for many millions of individual people, and know it far better than those individuals know it themselves. It’s also that a censor who censors things by not censoring them isn’t likely to be kept on the payroll for very long.

* Latin classes were twenty odd years ago and I dropped it as soon as I could. If I’ve mangled that I can only say that it’s because I don’t care enough to have researched it properly.

Posted on July 21, 2010, in Uncategorized and tagged Australia, Bans, Censorship, Do I have to draw you a picture?, Oh For Fuck's Sake, Power Crazed, Self Righteous Pricks, Useless Twats. Bookmark the permalink. Comments Off on Senseless censor..